For the last 14 years Tim Bastmeyer has been bringing his Blues Road Show to audiences both large and small. Tim has released three solo albums and one album with bass player/vocalist Jerome Tucker. Tim's entire catalogue rests in The Canadian Library of Congress and will be preserved as part of Canada's history.  In recent years Tim performs solo with intricate finger style guitar or as a trio with Jerome Tucker on bass and Richard Greenspoon on drums. Tim performs around 140 shows a year and can been seen at major festivals, theatres, and clubs. 2016 Cobalt Prize winner-Maple Blues Awards. 2009/2011 Durham Region Music Award Nominee.

“The playing is of a uniformly high standard and the grooves are all toe-tappingly pleasing.” - Ben Macnair 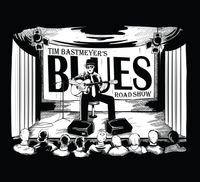